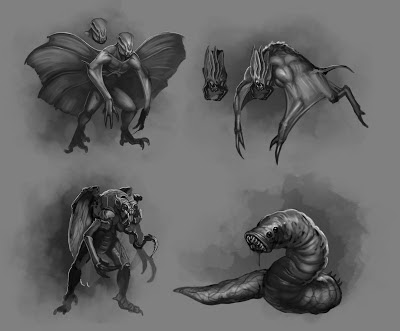 These are the initial concepts for a design challenge presented by CG Hub.  The challenge is to take a classic monster werewolf, mummy, vampire, or frankensteins monster and re-imagine it.  Im trying to stay as far away from the traditional interpretation of the vampire as I can taking cues from blood feeders in nature as well as many other aspects to inform my design.  The upper left concept is probably the most familiar.  The anatomy is overall humanoid however I have taken some characteristics from the gliding draco lizard and the celebes crested macaque to separated it from other more beast-like vampire interpretations.  I imagine that this creature would hunt human sized prey hiding in the upper canopy of forests then gliding down for the kill.  To the right of this is a concept based primarily on the anatomy of a flying lemur.  the facial structure was inspired by the nose leaf structures found in bats.  The lower left concept is based on blood sucking insects like mosquitos and ticks.  The final value study is based on the leech as well as the sea lamprey.  I was quick to dismiss this concept initially but I think it presents some interesting rendering opportunities.  I imagined that its body would be semi transparent allowing the viewer to see through the veiny outer tissues into its blood filled stomach much like the abdomen of a mosquito after it has fed.
Posted by Raul Ramos at 12:42 AM