So I've had these photos sitting on my hard drive for a while now.  I've decided to post them up since I've begun to get more and more serious about reproducing my sculptures.  I will be exhibiting at CTN Animation Expo along side my fiancee Rebecca Black-Gliko in November.  One of my goals for this year's CTN convention was to have items people could actually buy and take home with them.  I received a positive response to my sculptures and artwork from a ton of great people last year.  A lot of them asked if they could get a copy of a sculpture or a print of a sketch.  I always had to disappoint them and say no, and I felt really bad about that.  I decided I wouldn't let that happen this year so I've begun to make reproductions of a couple of my creature sculptures.  I owe a lot of what I'm going to show here to a class on 3d printing I took at Zbrush Workshops and my instructor Joseph Drust.  I also have to say a special thanks to Calvin Lo for helping me figure out how to better mold the horns of the character in the following images. 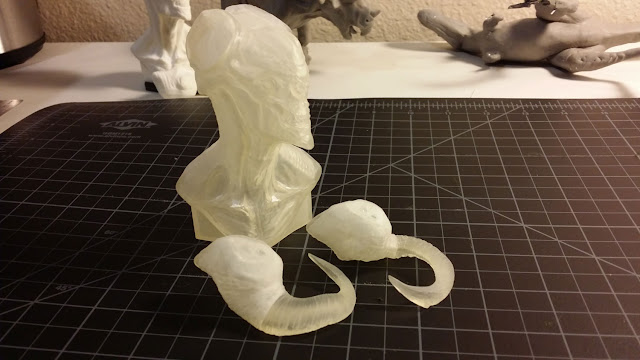 This is a photo of a print of my demon character Belial.  You can see some of the process for printing him in my Demon Bust 3D Print Rework Post.  I had to reprint him in a different material to get the level of detail I wanted.  You can actually see the original 3d print of Belial in the background of this photo. 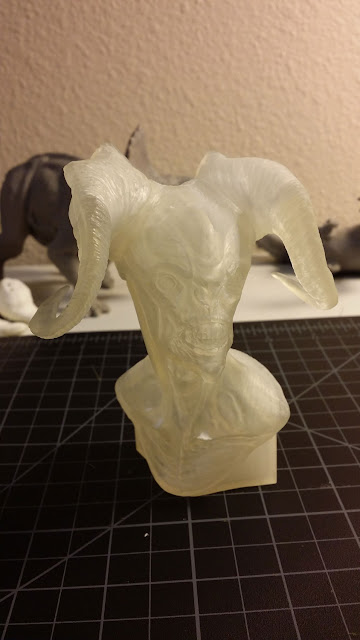 This is the same 3d print with horns attached. 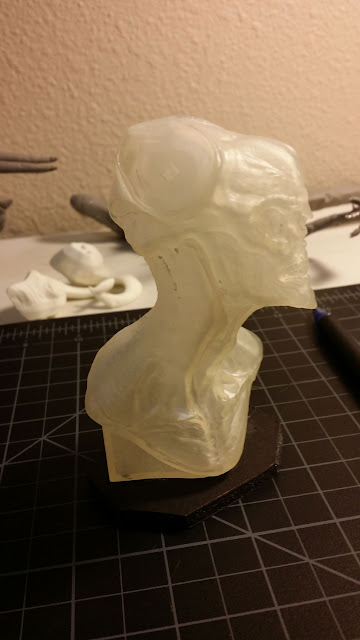 To prepare the sculpture for molding I attached the bust to a piece of foam core using a hot glue gun. 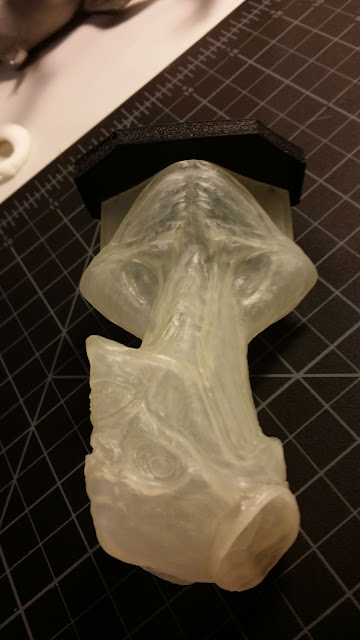 You can see the piece of foam core a little better here. 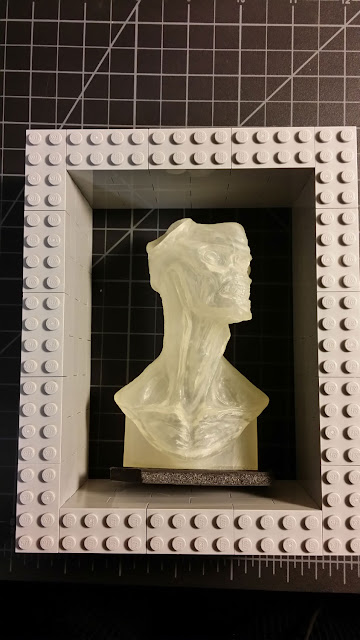 I used legos to build the mold box. 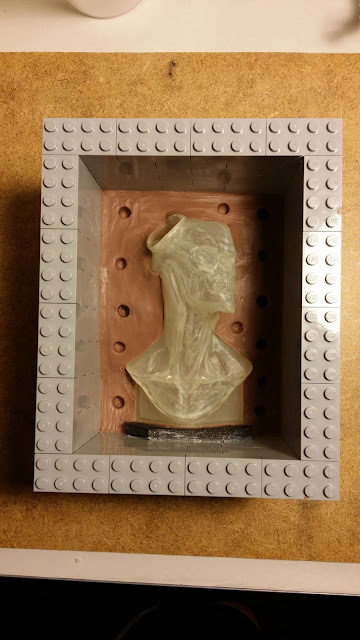 I attach the bust to the mold box with a hot glue gun .  I filled the bottom of the mold box with Monster Clay and made sure it covered the back half of the sculpture.  I pushed the back end of a marker into the clay to create registration marks (keys) so the mold halves would lock together once they were finished. 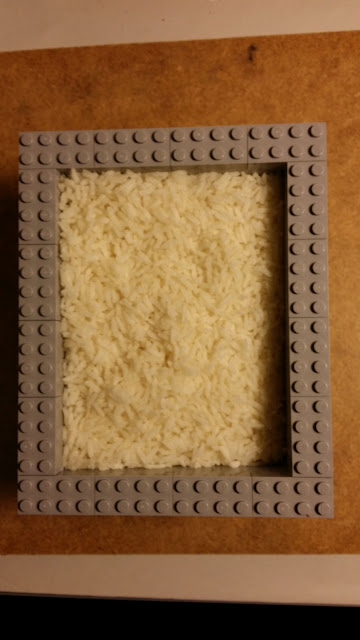 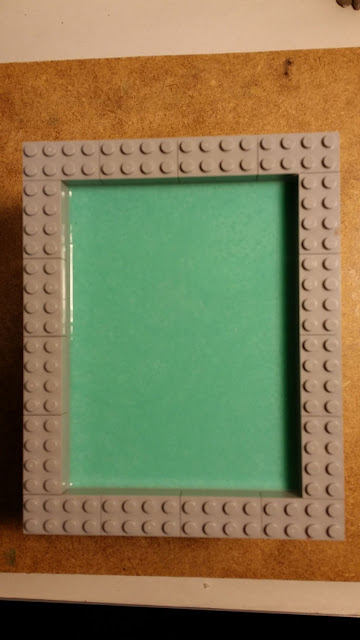 Here's a shot of the mold box after the silicone has been poured into it.  This type of silicone took about 4 hrs to cure and solidify. 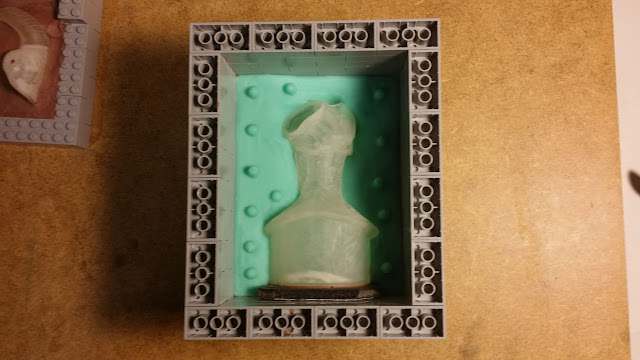 After the silicone cured I turned the mold box over and removed the clay from the back half.  I filled the empty space with more rice to get the volume measurement for the next batch of silicone.

Before pouring the second half of silicone into the mold I had to spray the silicone with mold release.  This would allow the two halves of silicone to separate after the second half cured.  At least that was what was supposed to happen. Unfortunately, I didn't spray enough mold release, so when the second part of the mold cured it stuck to first half and I ended up with big block of silicone with my sculpture stuck inside.  After a few moments of intense panic I realized all was not lost.  I remembered seeing a tutorial online where the mold makers poured a block mold like I had accidentally done.  They took a very sharp X-Acto knife and cut down the middle of the mold on each side starting from the sculpture outward.  They made a wavy pattern with the knife so that the two sides of the mold would key together.  I used the same method and was able to get my sculpture out, and the mold was still usable. 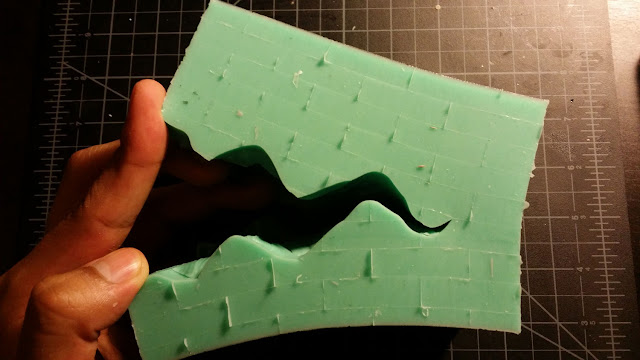 Here you can see the cut I made.  There is a similar cut on the other side. The cut only goes part of the way through letting the mold open up like a book.  This improves the registration letting the mold halves line up more accurately.  Not cutting all the way through also removed the seam lines that would have appeared on the top of the sculptures head. 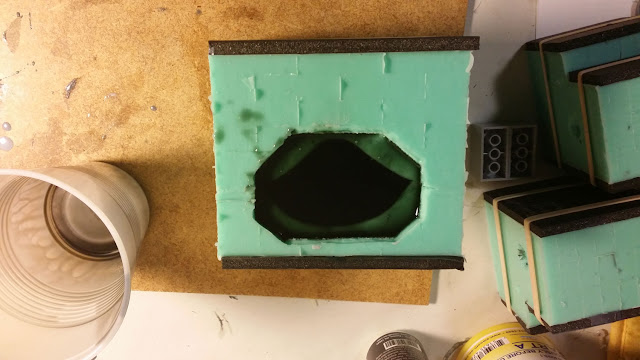 I cut pieces of foam core to support the mold and give a stiff surface to wrap rubber bands around to hold the mold together.

Here you can see the mold filled with resin.  The resin is a two part resin.  I mixed parts A and B together in equal amounts, triggering a chemical reaction causing the resin to heat up and harden.  The resin is normally a clear liquid with a yellowish tint that cures into an opaque white plastic.  I tinted this batch of resin with a black dye.  When the resin cures it will turn grey.

This stuff is really no joke to work with.  It starts to cure fast and gets really hot.  I've learned to be really careful handling these materials. 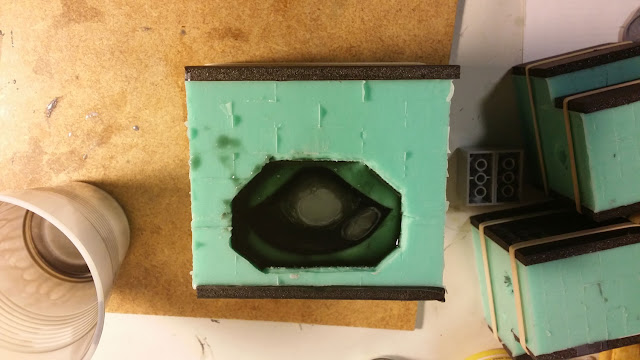 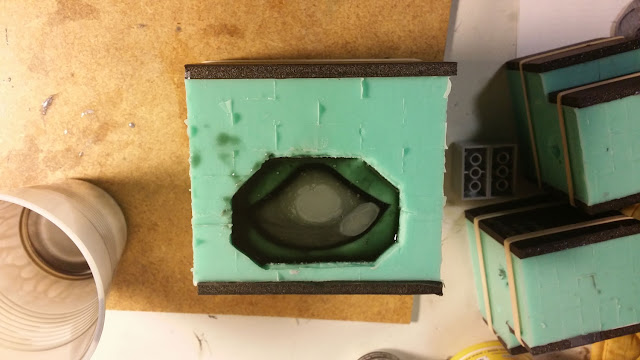 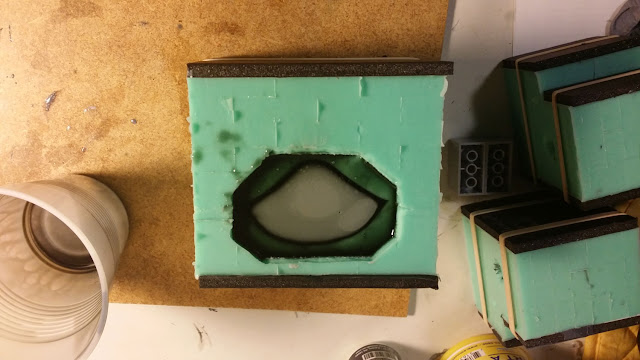 Here you can see the resin in the process of curing.  The way resin cures is kind of counter-intuitive.
It starts to cure in the thickest parts first.  You can see in this series of photos that it seems to cure from the inside out.  The thinnest parts of the model are the last to cure.  You can also see that the resin doesn't stay translucent and black but becomes opaque and grey. 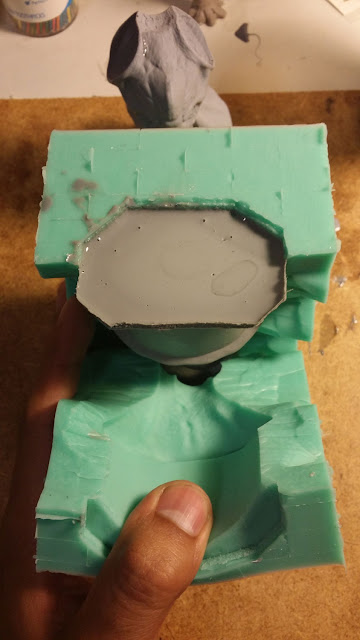 Here you can see me pulling a fully cured cast out of the mold. 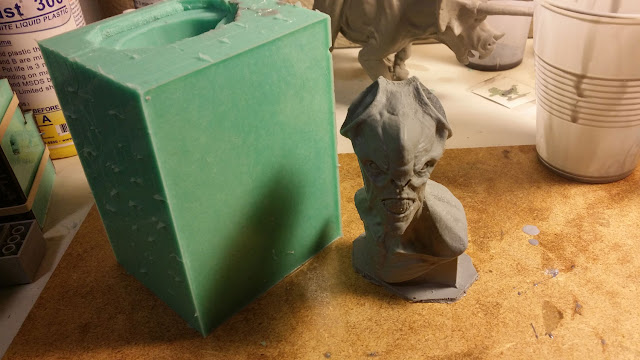 This is the same cast sitting next to the mold it just came out of.  The excess plastic you can see on the base will be trimmed off. 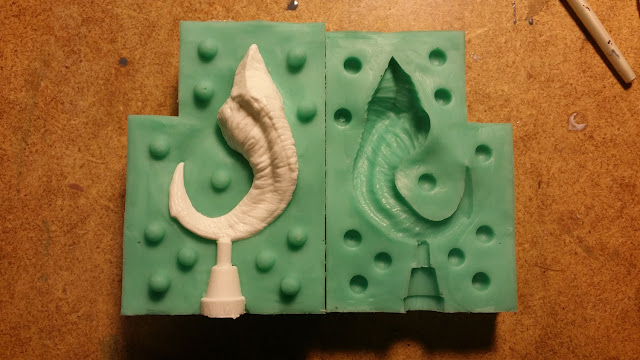 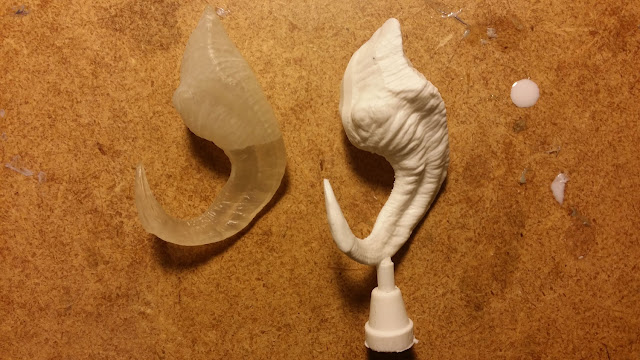 Here are a couple of photos showing the mold and cast of one of Belial's horns.  The first image shows what a two part mold is supposed to look like.  This time I actually applied enough mold release for the two halves to separate. You can also see what the resin looks like when no dye has been applied to the liquid resin.

In the second image you can see the horn cast sitting next to the original 3d printed horn.

There were still some kinks to work out after I made the molds and started to pull the first few casts out of it.  Each mold seems to have its own character and I have to learn little tricks to deal with them in order to consistently get a good cast.  I've already got a good number made.  I feel like I've finally reached a level of proficiency, with this mold at least, to confidently start making more reproductions.  And not a moment too soon.  CTN is just around the corner.

I will keep you updated in the coming weeks with progress on the Belial bust and some other things I have planned for the event so keep an eye out.

Thanks for stopping by!

P.S.  I'm still really new to a lot of this stuff so if any of you out there with more molding and casting experience stumble across this post and see some things I could have done differently or better, feel free to leave a comment here.  I'd really appreciate any extra help you can give me.

Posted by Raul Ramos at 7:00 PM No comments: