Just a few sketches I did during CTN. I'm a big fan of Godzilla so here are a couple pages of the big guy and Rodan at the bottom.  Done with ball point pen on sketchbook paper. 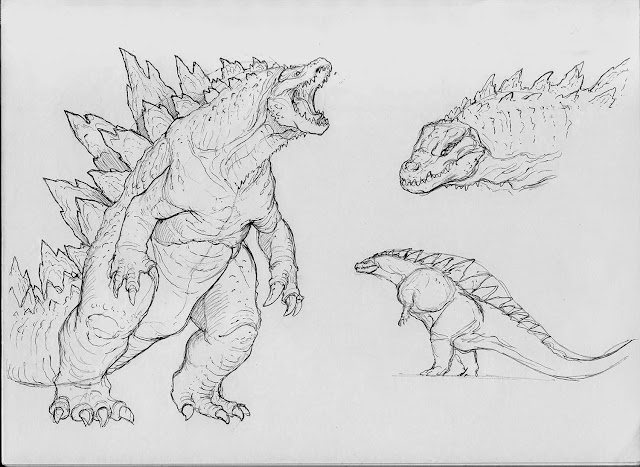 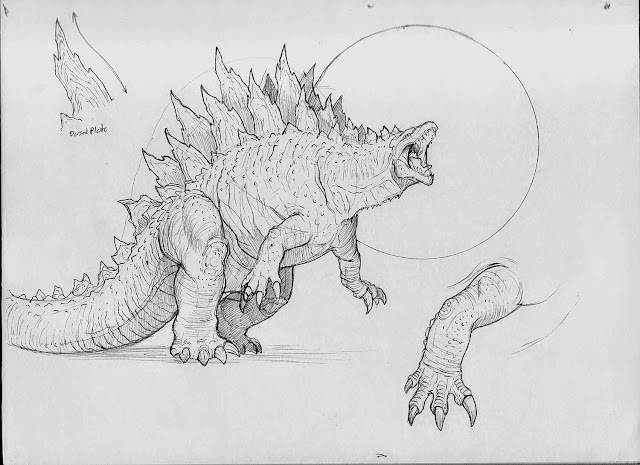 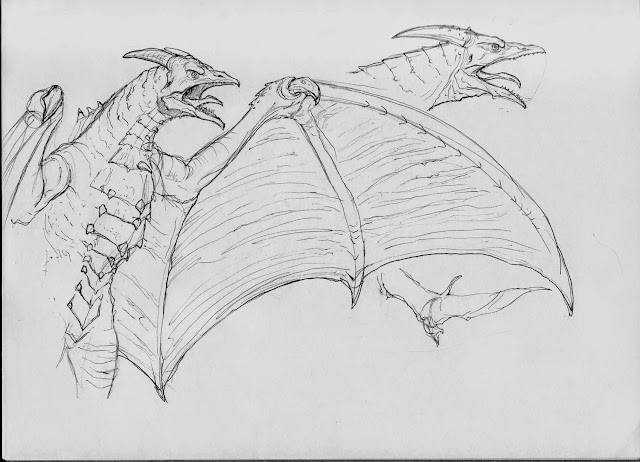 Ive been taking a course through Zbrush Workshops on sculpting for 3-D Print.  Using what I've learned so far, I decided to take one of my previous sculptures and rework it a bit to make it printable while completing a few assignments at the same time. Right off the bat there were a lot of problems that prevented my design from being printed. Most of the problems came from the the mouth and nose area.  You may not be able to tell form the images but there were small negative spaces behind most of the teeth that occurred where they overlapped and in the deep spaces on either side of each tooth.  There were also thin spots in the structure of the nose especially in the small strip of bone that separates the two nostrils.  To make the bust printable each of the negative spaces created by the teeth needed to be filled in, and the thin spots in the nose thickened while trying not to impact the design too much.  This proved to be the most tedious part of the rework.  Once that was addressed the remaining issues were relatively simple to fix.  I needed to add a base so that the bust could stand when it was printed.  This I did by extruding an area at the base of the bust down and flattening it with trim brushes.  I also needed to adjust the pose so that the bust would stand upright without the risk of falling over.  Using transpose master and a zsphere rig I modified the pose to be more upright and balanced.  Below you can see the finished bust with all the changes applied to it.  I used Keyshot to render the bust in the first image.  This was the first time I used Keyshot and I was really surprised at how easy it was to jump into. The alternate views were created using Zbrush. 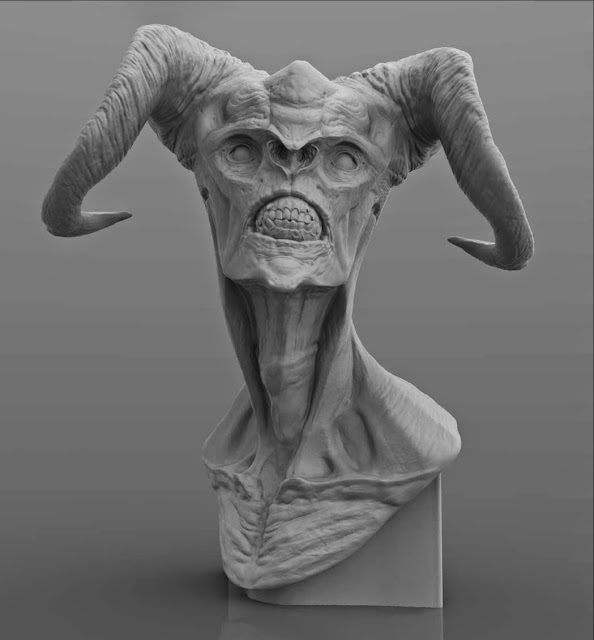 The next step in the process was cutting up the model.  Not all objects that are destined for printing need to be cut up.  If a model is fairly simple there is really no reason to break it up into parts.  However, because I felt that the horns of this model could be fragile, I decided to separate them from the head to minimize the chances of  being snapped off during printing or shipping. The small rectangular spaces cut into the models head and sticking out of the base of the horns are the keys.  They serve as registration marks, locking the pieces in the correct position when the model is reassembled.  If done correctly the seems in the model are almost undetectable. 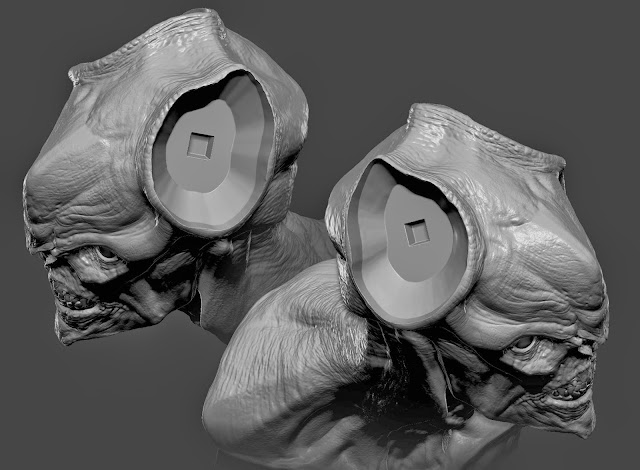 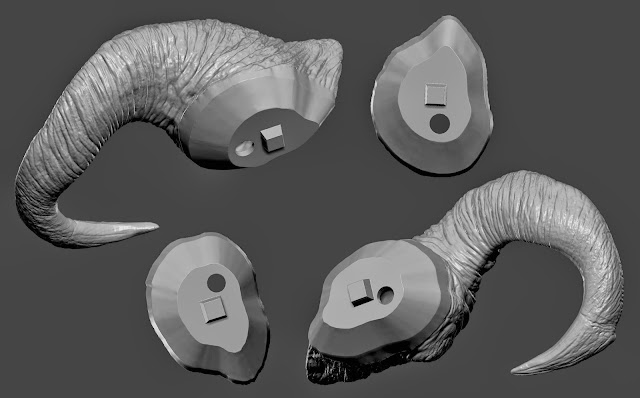 After cutting and keying the model I moved on to the hollowing process.  Hollowing the model is done primarily to cut down on material costs.  A hollow model is much cheaper and prints faster than a solid one. The material dictates the thickness of the walls and the size of the vent holes that need to be cut.  The vent holes, which can be seen at the base of the bust and near the key of each horn, are meant to provide an escape for excess material trapped inside the hollow space of the model.  In this case the walls of the model are approx 1.5 mm thick.  The vent holds on each horn are around 4mm in across and the hole at the base of the model is 10 mm wide.  These holes can be patched up after printing using certain types of putty that can be hardened and sanded. 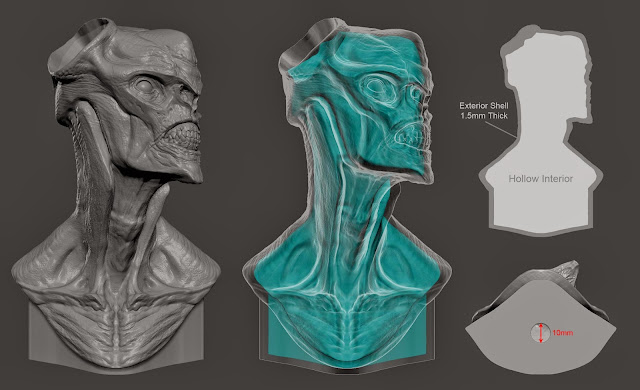 This is a shot of the model separated into its three parts.  The model is then sent off to the printer.   Each piece will be printed as a separate part to be reassembled later 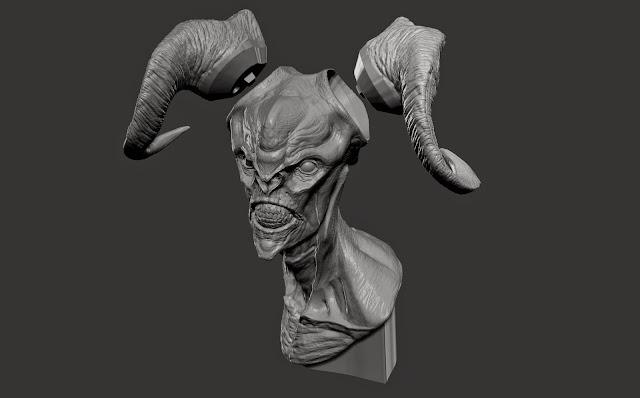 .
After about a week and a half of waiting my print finally arrived in the mail.  I used Shapeways to print this bust and selected their polished white plastic material.  The bust stands approx 5 inches tall. 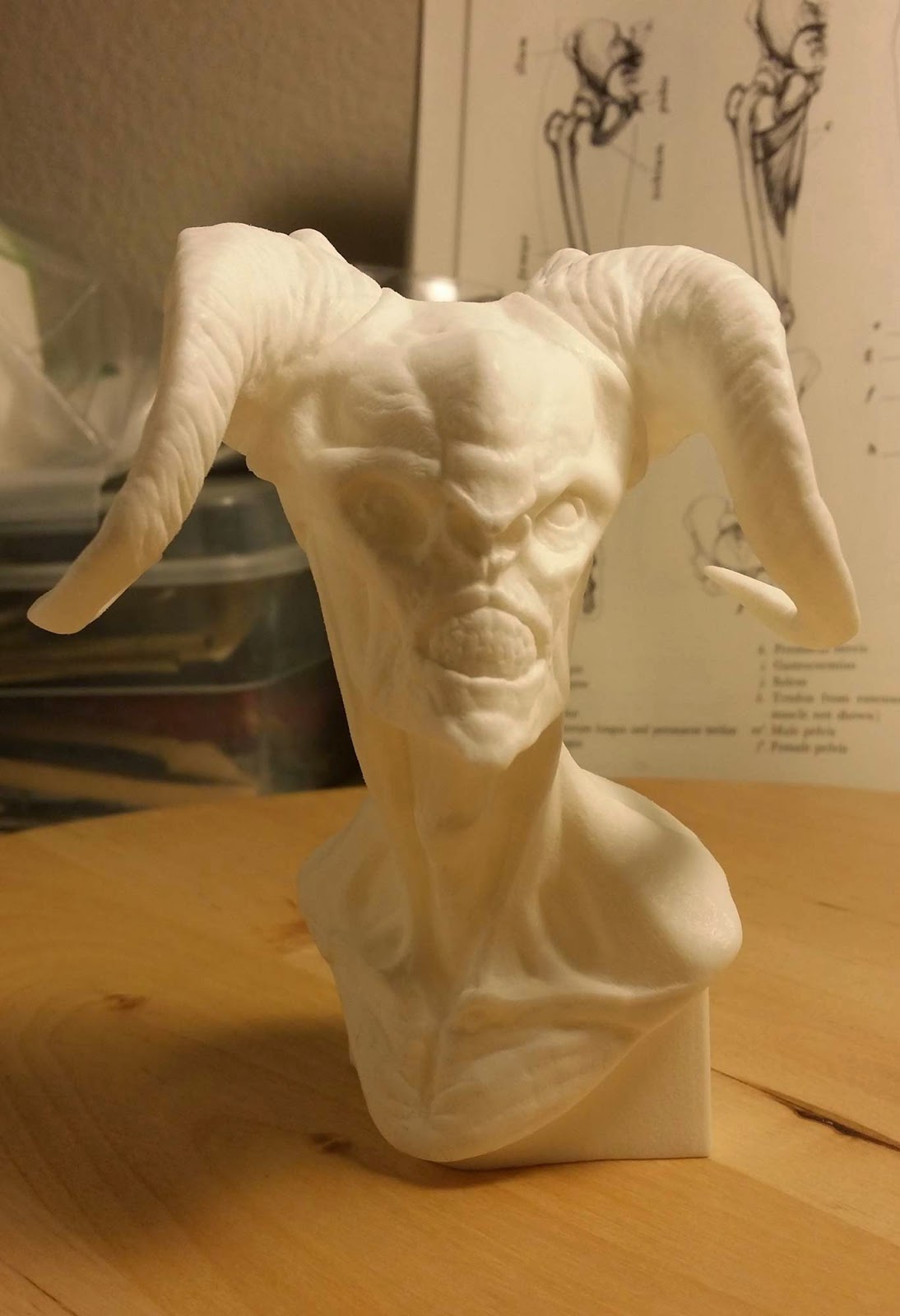 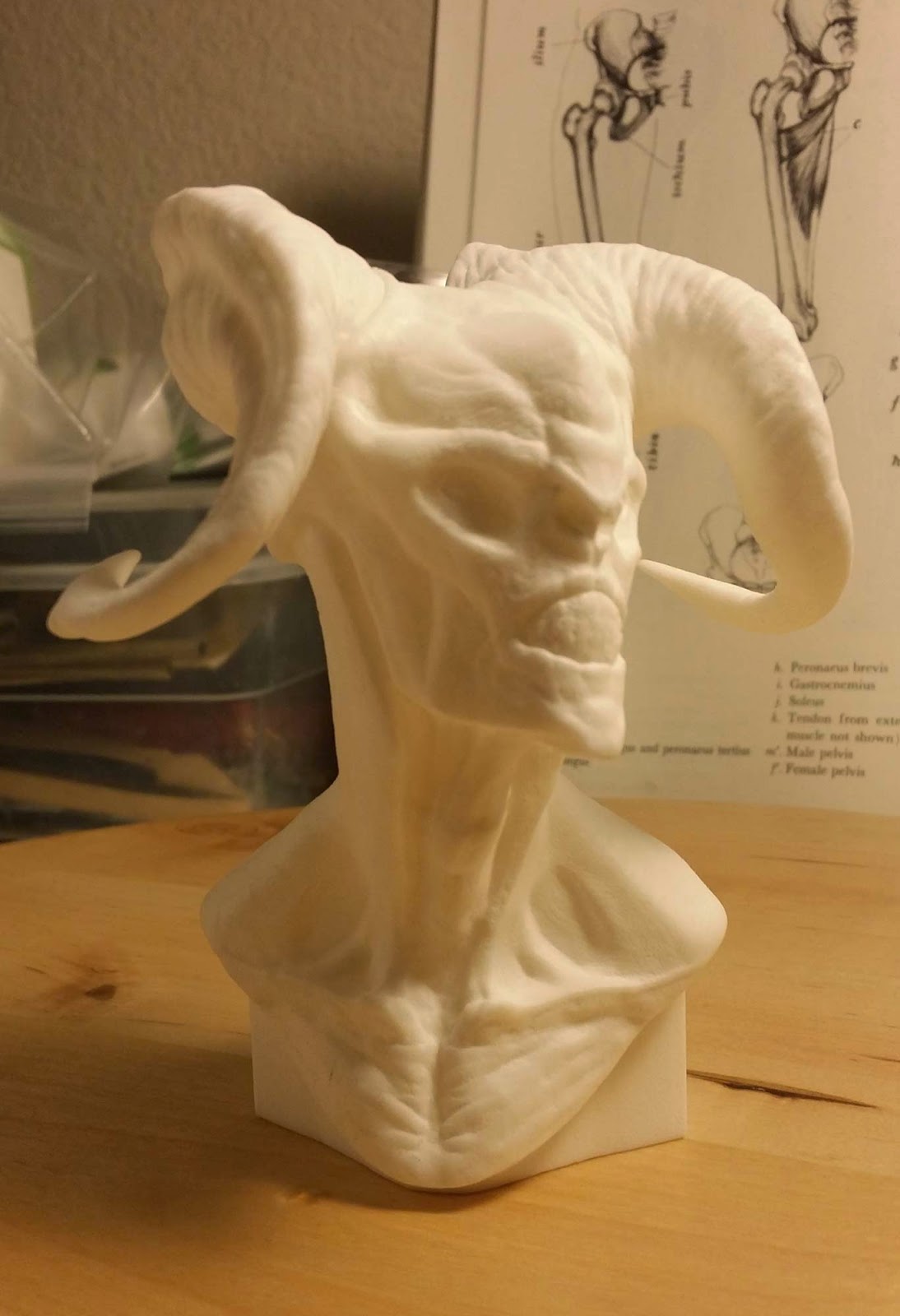 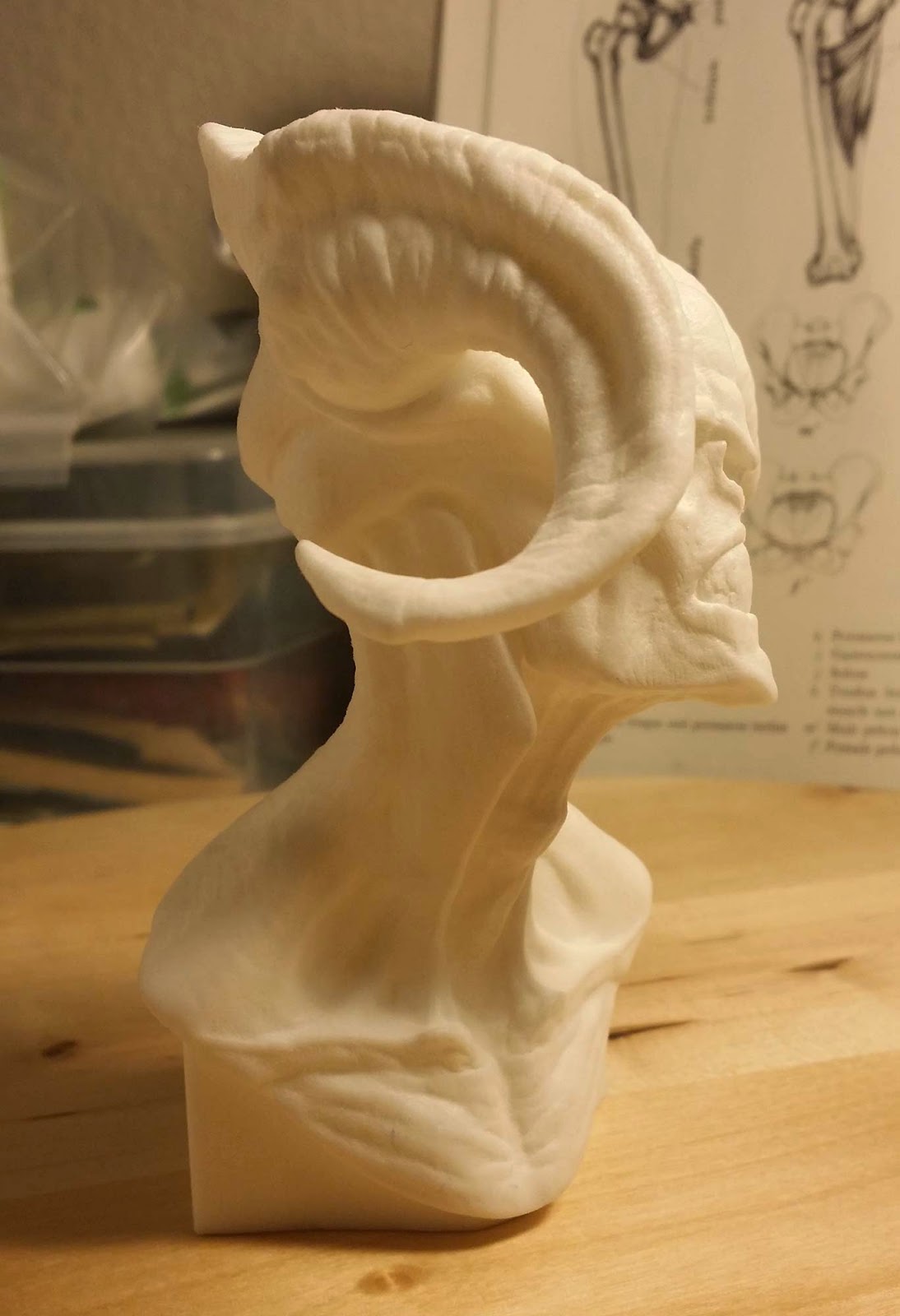 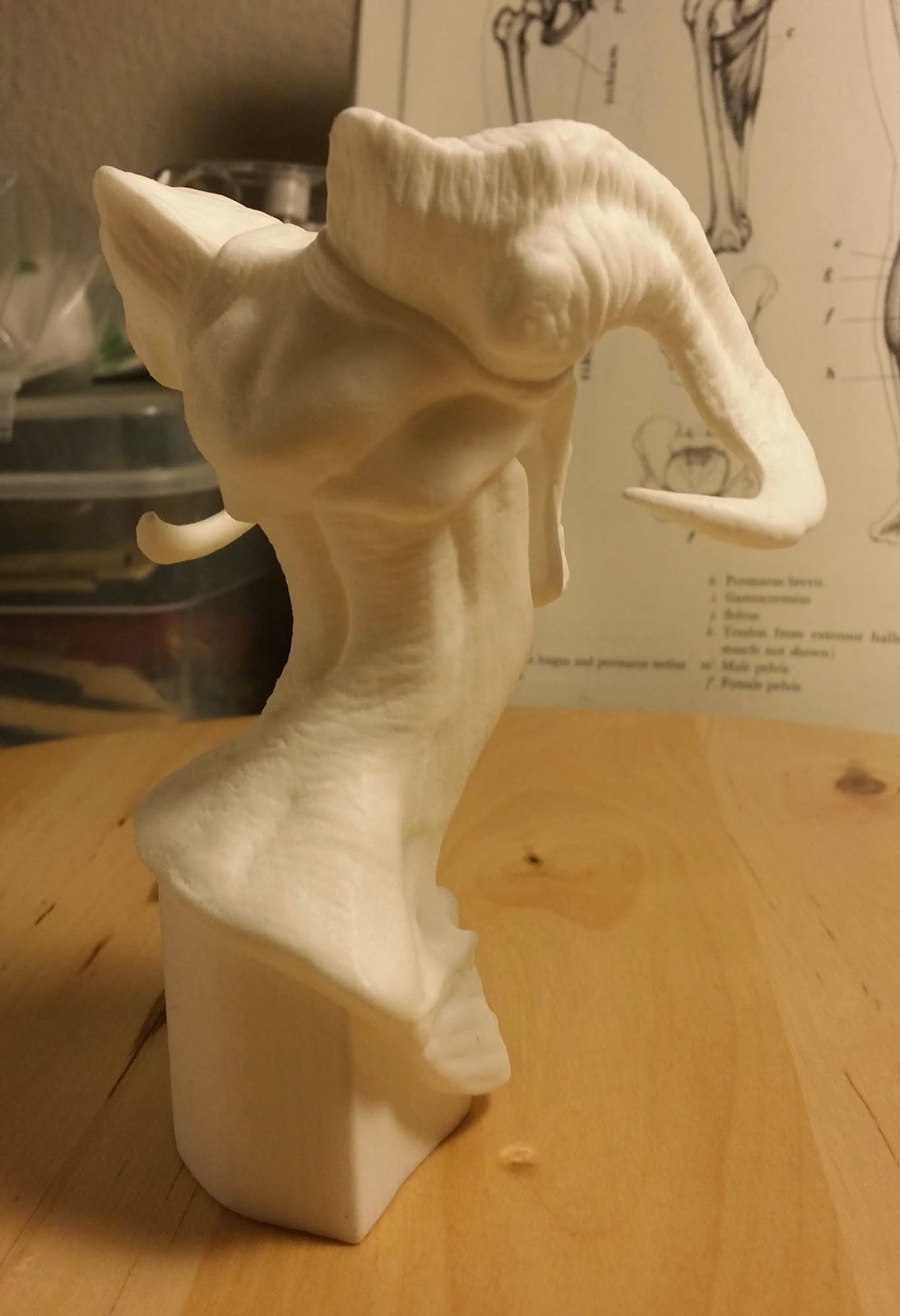 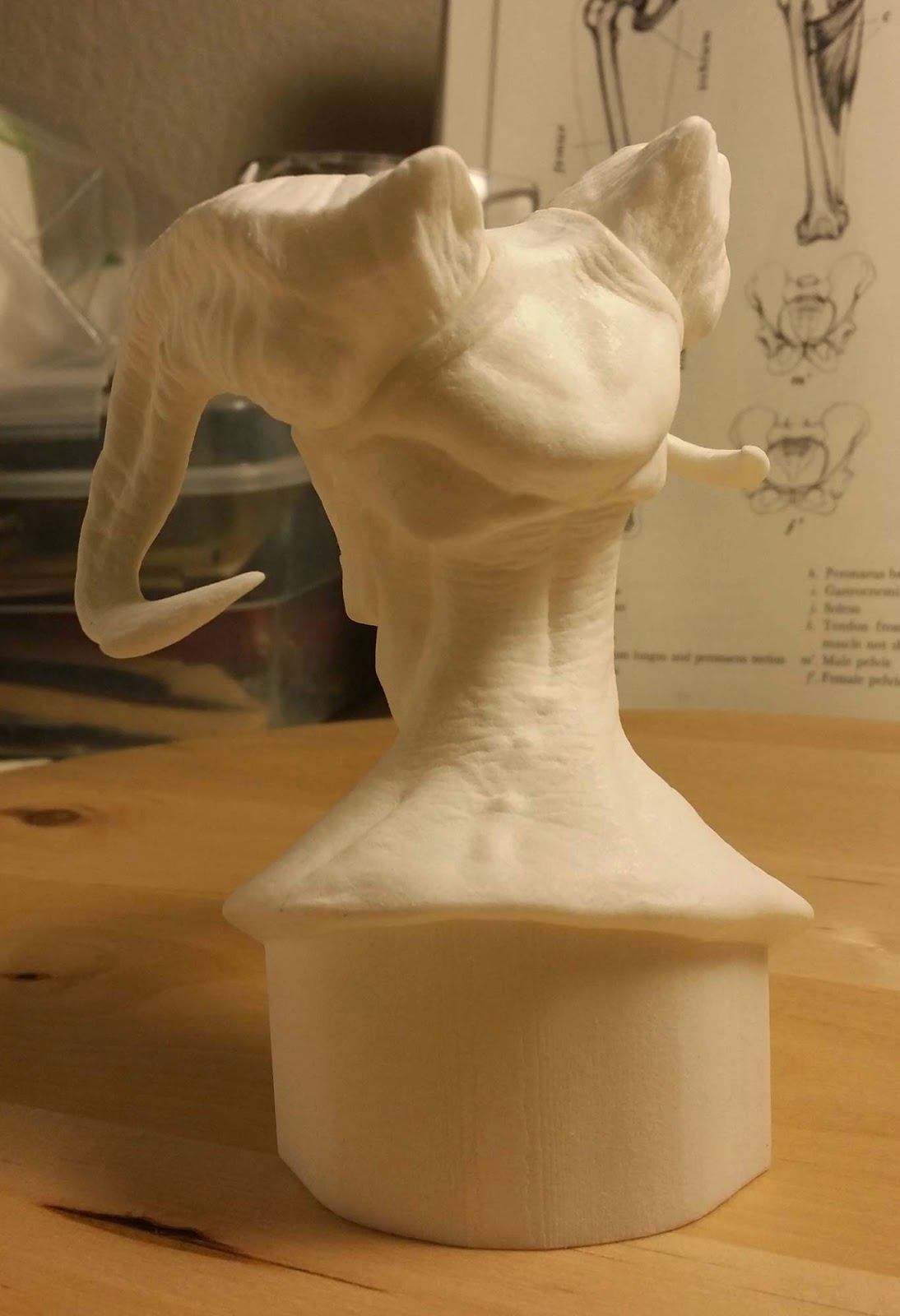 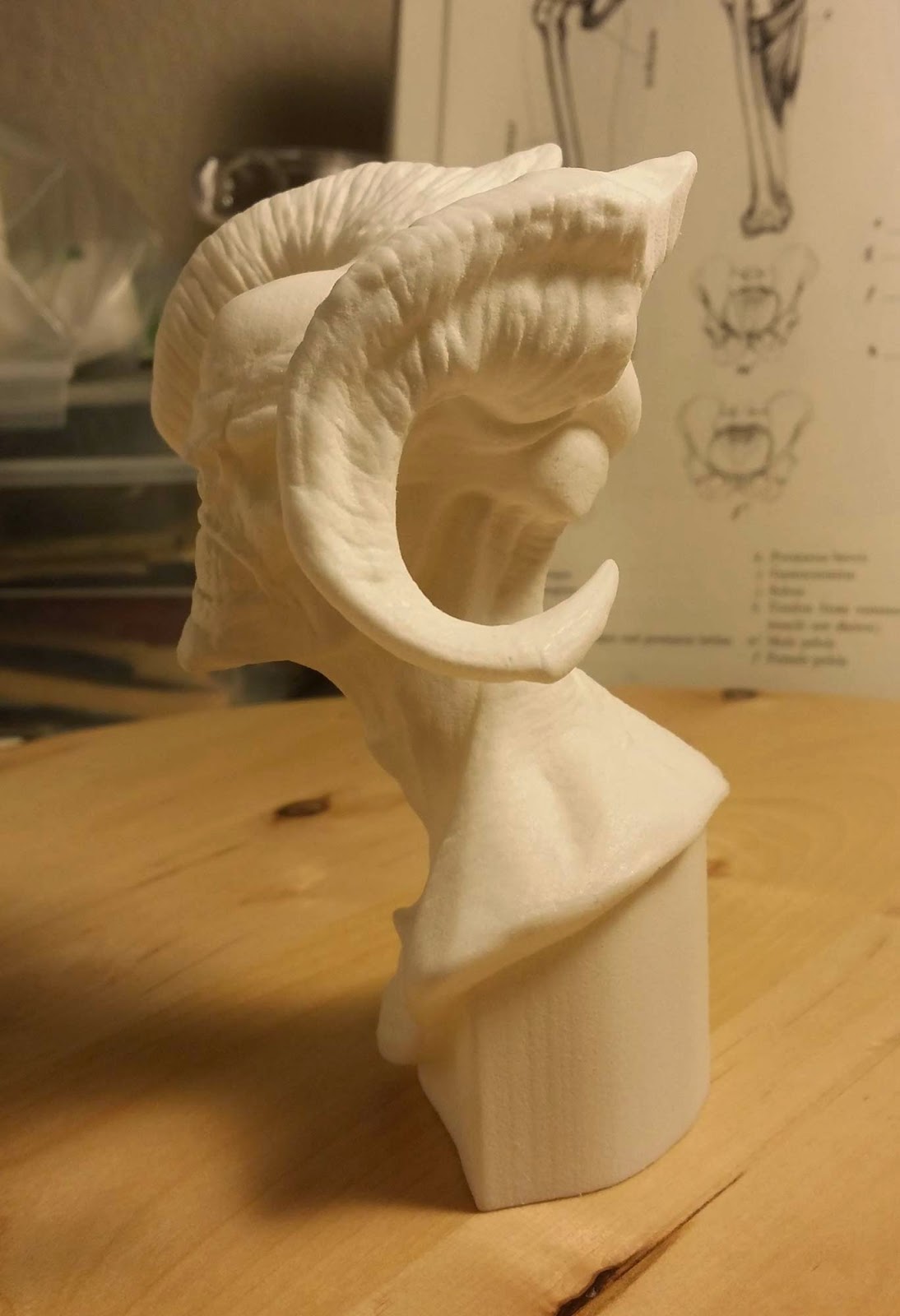 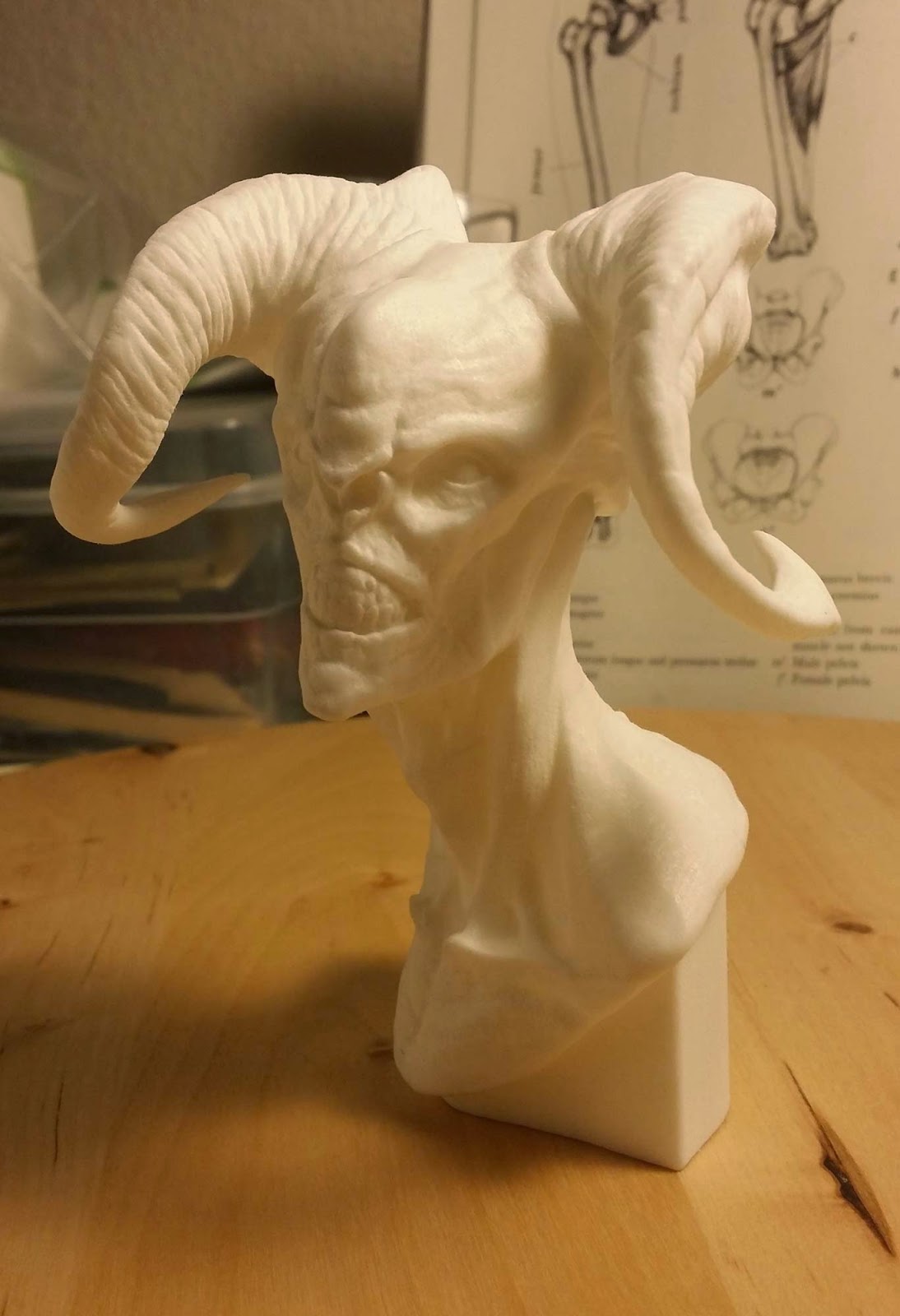 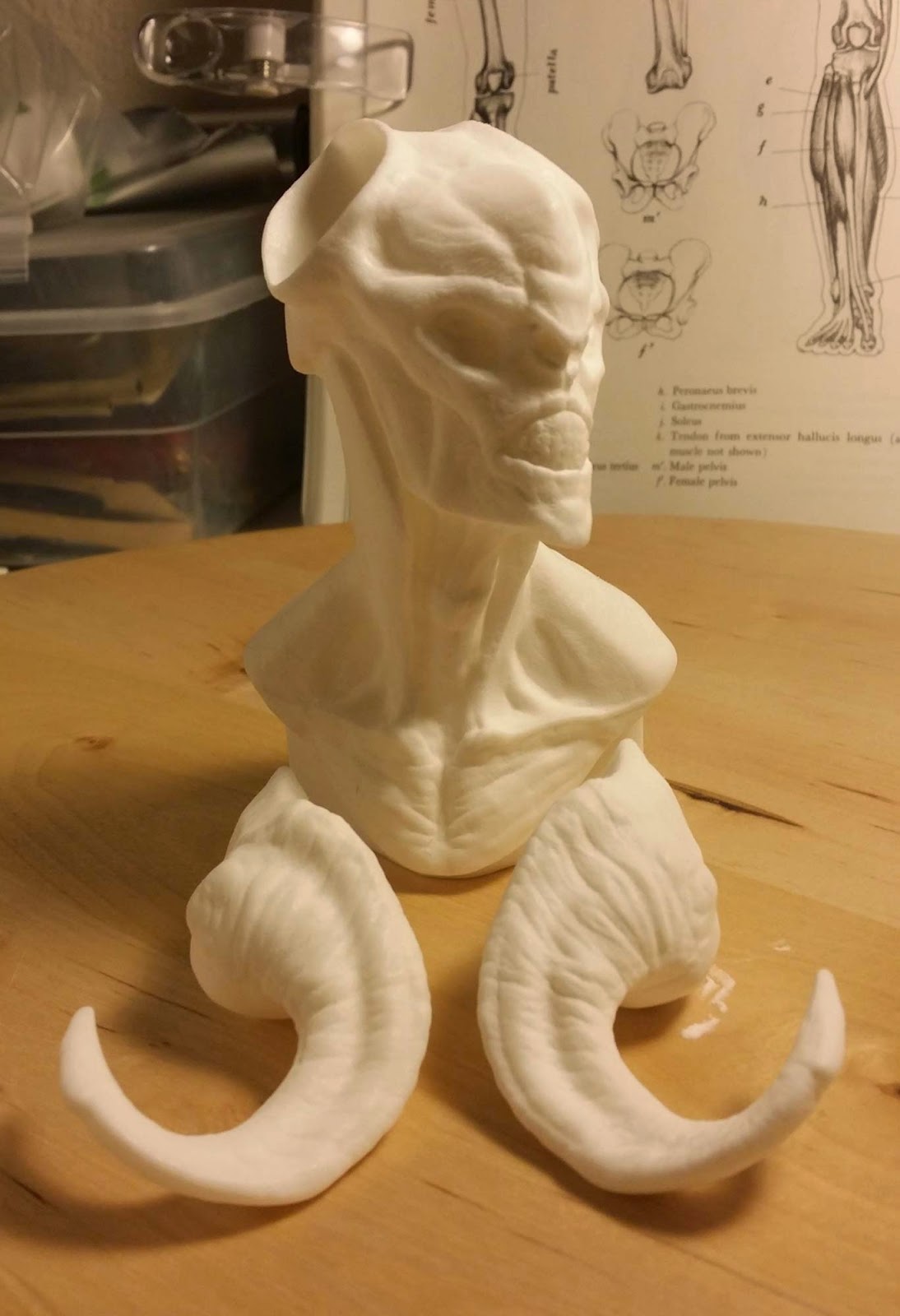 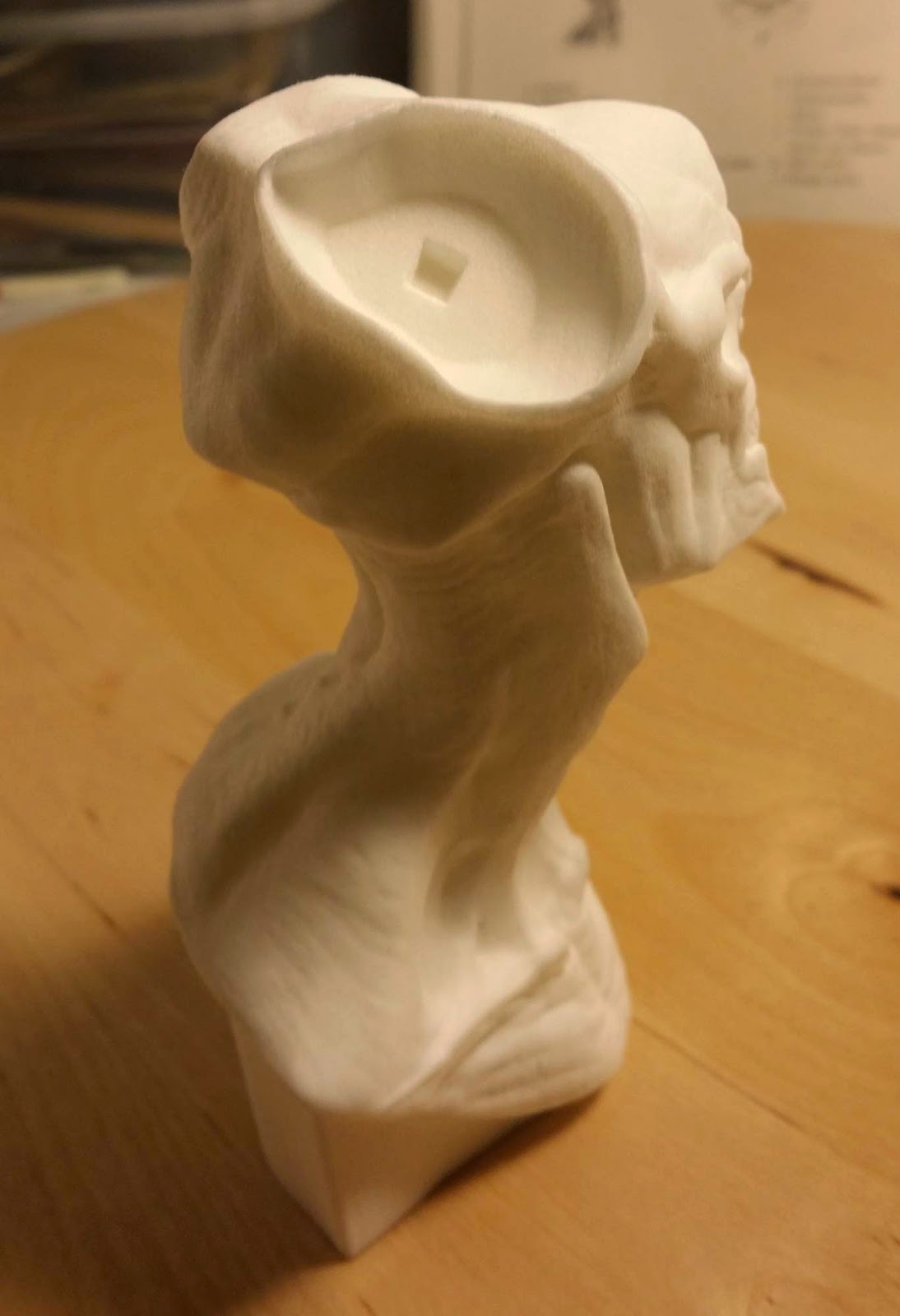 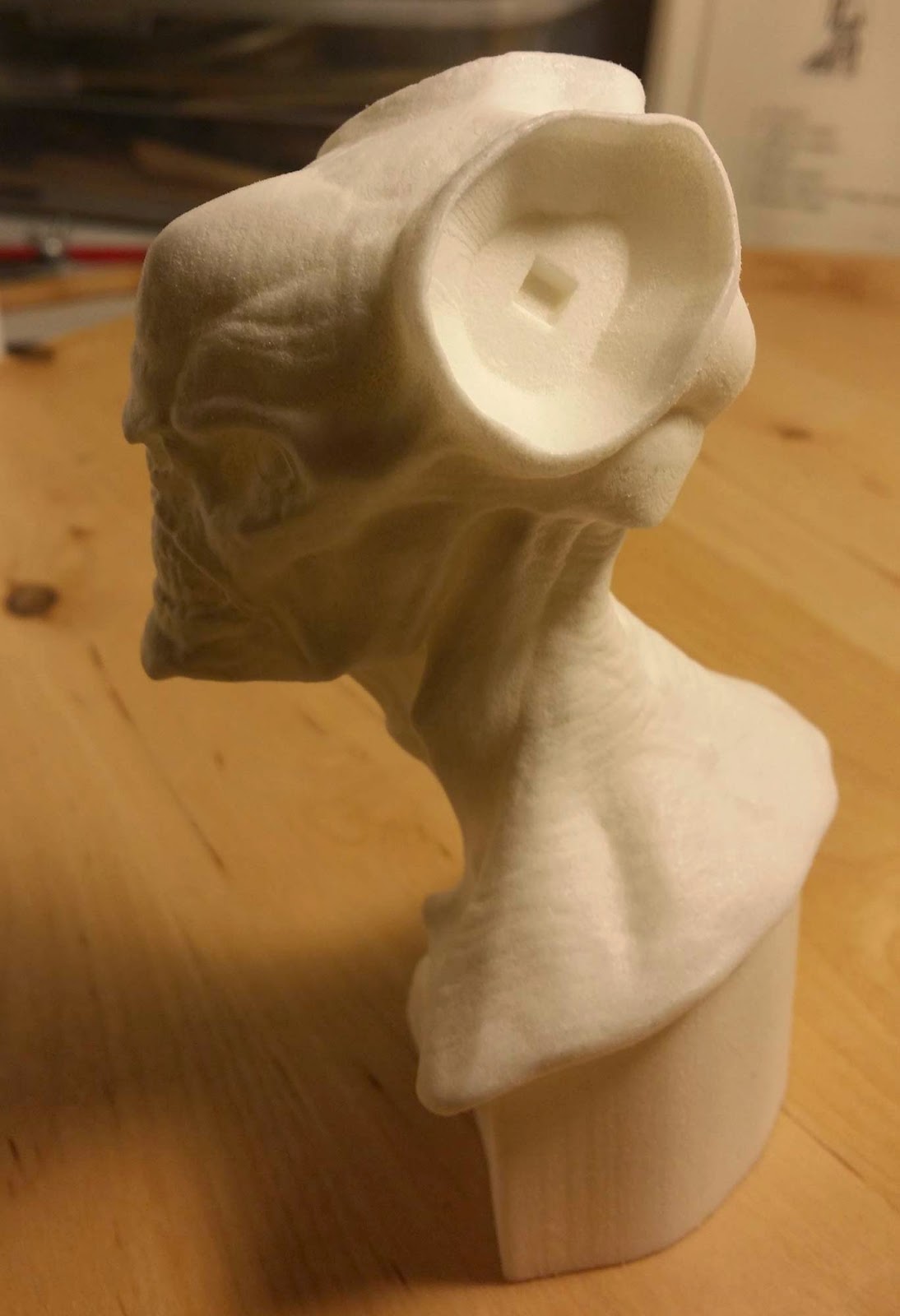 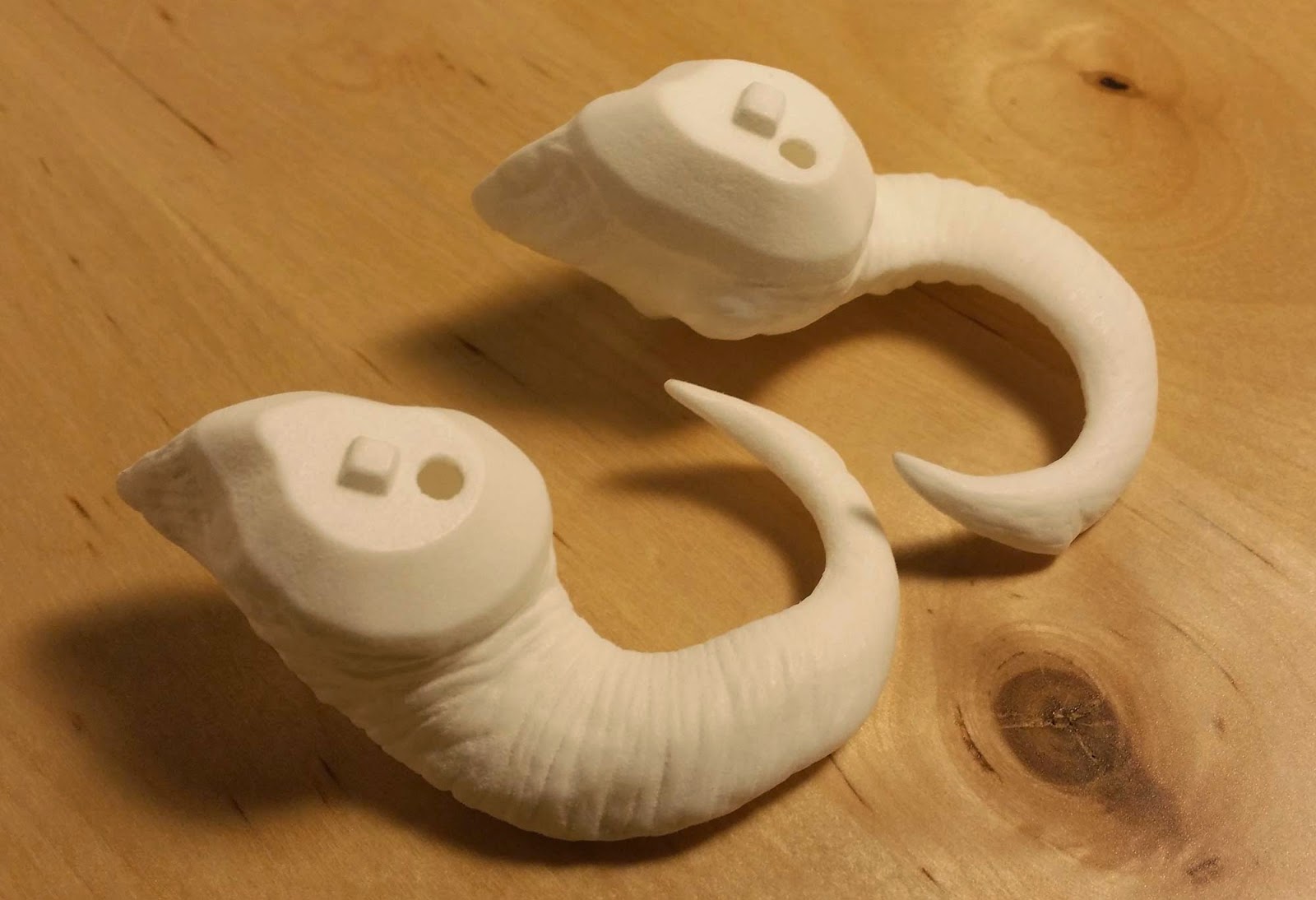 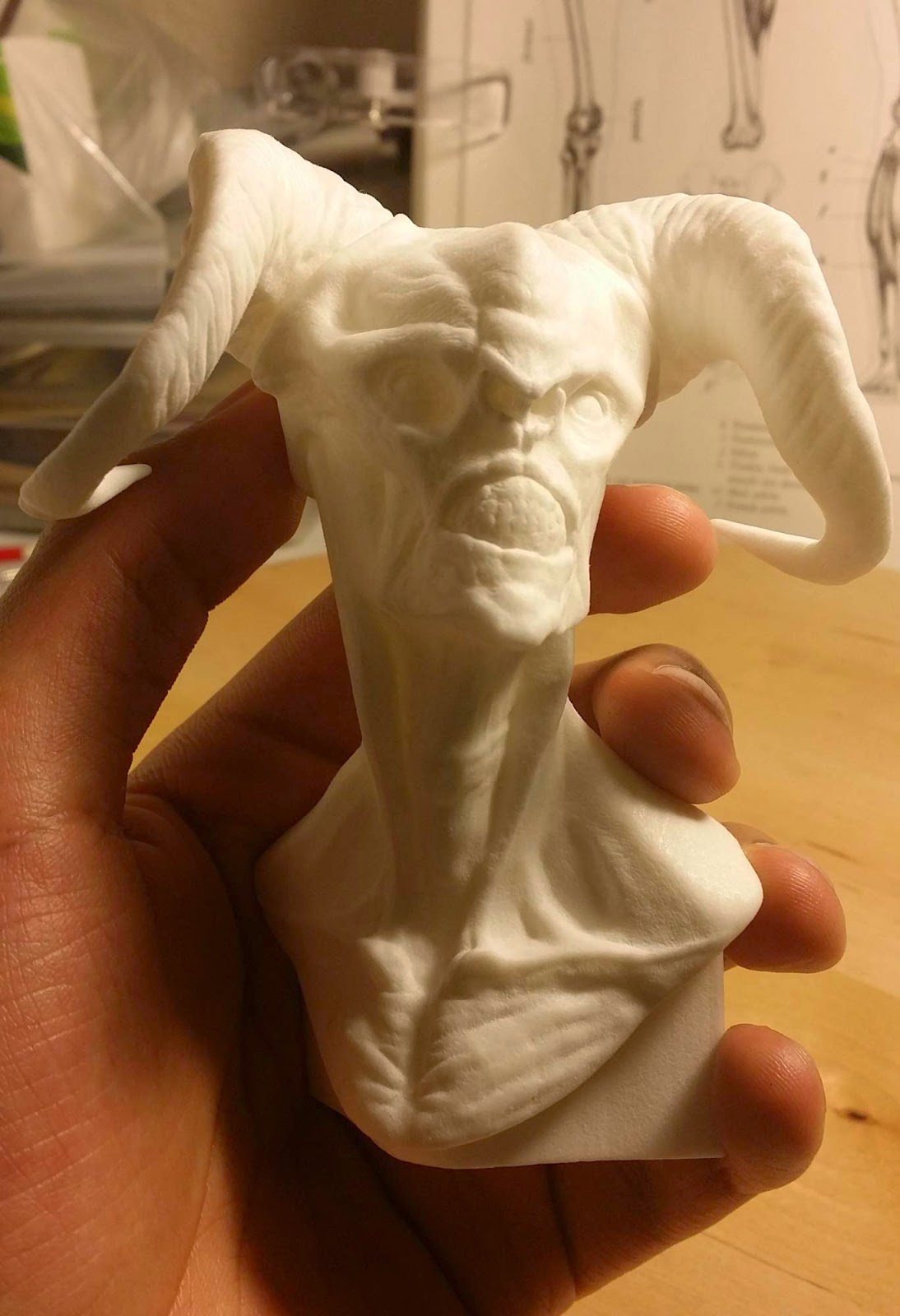 Overall I'm pretty pleased with the way this print turned out.  There was a bit of detail lost due to my material choice.  Despite that I think I learned a ton by going through this process.  I messed up a lot and there were definitely some frustrating parts I had to work through, but it felt great to finally hold this sculpture in my hand.  I may eventually reprint this bust in a different material that preserves more detail.  If there is enough interest I hope to have this bust available for sale in the near future.
Posted by Raul Ramos at 11:27 PM 2 comments: 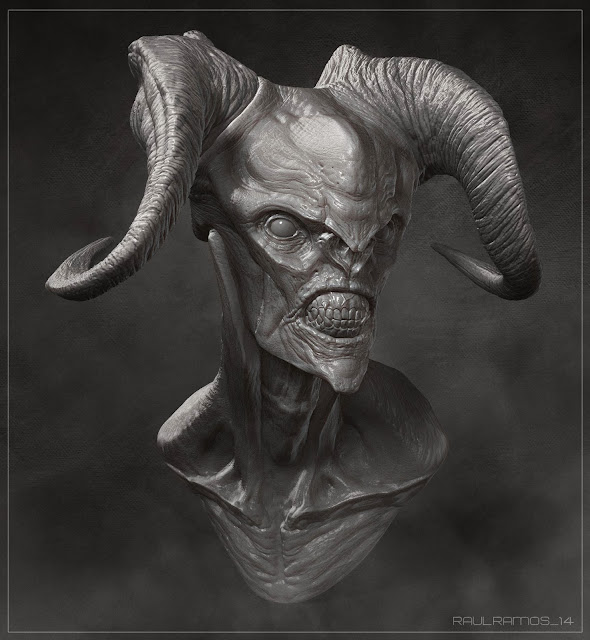 This is the completed first assignment for a creature sculpting class I was able to take at Zbrush Workshops.  I hadn't worked in Zbrush for a while prior to starting this class so getting back into the program was a challenge.  Watching our instructor Peter Konig run through his process was exactly the thing I needed to get back into sculpting digitally. 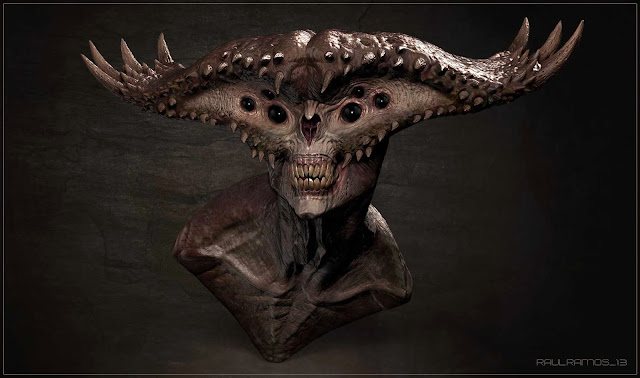 Posted by Raul Ramos at 8:37 PM No comments: